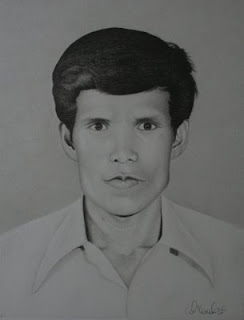 Just a little more work was required to complete the portrait.Nice to draw something relatively quickly and uncomplicated every now and then.I dont do many portraits and generally their a little more detailed than this one but that was just due to the available reference photo,however i find them a lot easier than wildlife drawings with much more use made of blenders and blending techniques which can speed up the process considerably.
Posted by Unknown at 16:10 No comments: 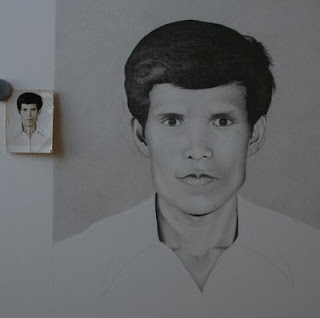 Having had a few days off to re-charge the batteries after the epic that was the greylag drawing i'm back at the drawing board or i should say boards.i have two drawings started,one, which is in the very early stages(ie; just outline laid out),and the second which is near completion.
i was asked by an old friend if i could attempt a portrait of her father who passed away some time ago.The only photograph she has of her father is a 40 year old passport style photo and its starting to get a bit dog-eared now.i agreed to try on the basis that it would have to be fairly small as there really isnt any detail to work from available in the reference photo.i'm quite pleased with how it's coming along and all there is left to do is add some detail to the shirt and darken up the background a little.i do hope she likes it,as it will make her day to have a more permanent memorial to her late father.
My second image is a three-quarter study of a golden eagle which,so far,i have managed to draw the outline onto my prepared paper but little else.i'll post an image when there's something more solid to see.
Posted by Unknown at 17:22 No comments: 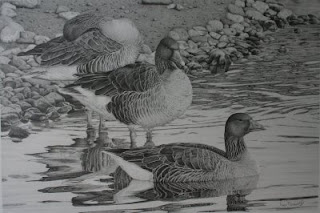 The greylag geese drawing is finally complete after a few hours on reflections and a little tweaking here and there this morning.i am very pleased with the end result,i now look forward to getting it properly scanned and safely behind glass.All i need to do now is think of a title!.
Posted by Unknown at 13:29 8 comments: 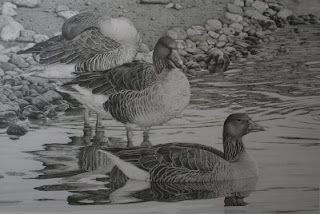 At last the finish line is in sight with these greylag geese.i was hoping to have it complete by today but it was just too much of a stretch and the brain lag caught up with me.I can honestly say that this piece has really taken it out of me concentration wise,never have i felt so tired at the end of a day in the studio as when working on this drawing.This drawing has been a real marathon for me and at times a real struggle with mind over matter,however now that it's nearly done i'm getting a tremendous sense of accomplishment and at last can relax a little and enjoy the fruits of my labour.I've about 3 or 4 hours work left on it,mainly working on the reflections from the foreground goose and then just a few tweaks here and there before i can declare it done........can't wait!
Posted by Unknown at 15:19 3 comments: 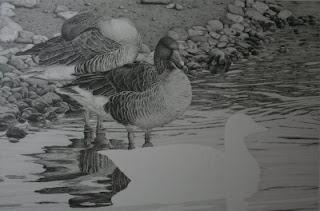 Have now completed my rendition of the water,i'm reasonably happy with it thus far although i wont be able to see the full effect until the drawing is entirely complete.
Posted by Unknown at 17:49 2 comments: 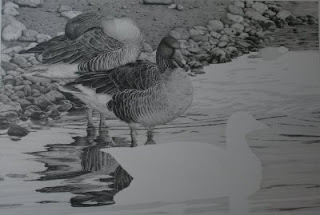 After another days work the reflections are starting to come together and the water is progressing.I'll leave the reflections from the last greylag untill ive actually completed the goose so i get the tonal range correct.
Posted by Unknown at 17:52 1 comment: 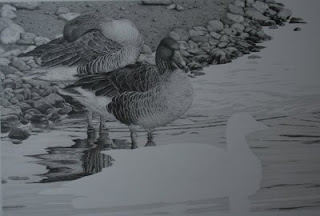 A decent day in the studio today with very few interuptions has allowed me to progress quite well on rendering the water and reflections.The picture is finally starting to 'hang' together and its only taken approximately 84 hours so far!
Posted by Unknown at 20:52 3 comments: 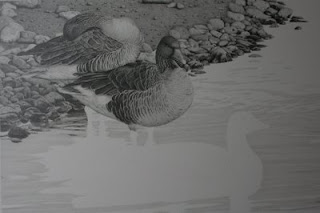 This last week has been a test of resolve versus the urge to escape the confines of the studio and enjoy the wonderful hot and sunny weather.Needless to say, and, as is evidenced by my slow progress on the drawing,the sun won the moral argument.i have however managed to complete the second greylag and have now made a start on the water.with the water i initially put down a layer of H grade pencil into the lightest areas and then blended it smooth with a stump and then using the same stump rubbed onto a scribbled patch of B grade pencil and over-layed some darker areas within the lightest parts.having completed the lighter areas i am now working up the darker areas of water using all grades from H to 2B,the idea being to try and depict the broken up reflections on the waters surface which almost resemble oil on the surface.Having done this many times before i know that it wont really look 'right' until the whole of the paper is covered by water and then it will almost seem to ripple before your eyes,in the meantime i stick religiously to the task of individually portraying each little ripple and reflection.Apologies for the picture quality as i took this in a hurry very late in the day so its a bit washed out on the left hand side.
Posted by Unknown at 21:04 No comments: