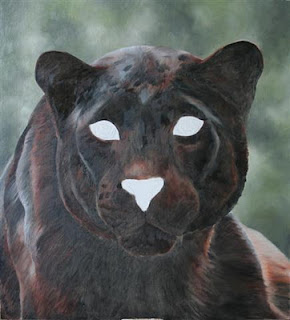 Black Leopard portrait
My new year has had a bit of a late start artistically as ive been struggling to rid myself of an annoying head cold since christmas which has badly affected my concentration and thus stalled paintings that ive been preparing.I have started several new oil projects,however the only one that has progressed enough to be worth showing is this portrait of a Black Leopard.Those regular followers of my blog will no doubt have spotted already that this is a coloured version of my very successful graphite drawing of a black leopard featured on here some time ago.This is the almost complete under-painting and as you can see ive been busy experimenting with a few colours here and there whilst the painting is in its very early stages.Ive deliberately avoided using black and instead mixed my own 'black' using burnt sienna and ultamarine to give a less harsh finish and although its only applied quite sparingly here i'm happy that it will work nicely.i particularly enjoyed using Alizarin crimson for the first time as ive had it in my repertoire of paints since the beginning of my oil adventure on recommendation from fellow artists and have been wondering when i would get to put it to use.The painting has now been put aside to dry for a while and i may leave it as such until the end of the month as i have an oil painting for beginners day course to run and this would be a good example piece to show my students of the progression of an oil painting.In the meantime i have several other pieces at very early stages that i can work on and will post soon if they progress successfully.Last but not least a belated Happy New Year to you all.
Posted by Unknown at 10:57

Hope your health improves. Seems like literally EVERYONE in the USA is fighting a pneumonia and bad cough as well and it is highly contagious. I do love the ALizarin Crimson as well almost as much as the blues some artists put in their black cat's coats. Nice work.