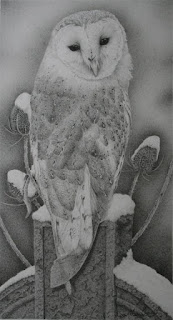 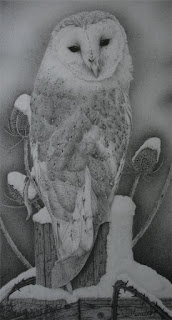 As the temperature outside the studio has been soaring over the last week or so ive found it increasingly difficult to concentrate and the lure of sunshine has frequently got the better of me meaning very little work has been accomplished.with several shows upcoming ive been taking a look at some older graphite pieces that for one reason or another have not sold and thinking about how i could improve them and show them once again.in the above example i had originally drawn the owl atop a celtic cross in an effort to make it a little different from several earlier barn owl pieces featuring more natural elements.for one reason or another its never really gelled with the public and so i decided to strip the drawing out of its frame and using a little blu-tac lifted the graphite from the cross and then carefully re-drew the elements as a fence post and where some of the earlier graphite lines from the cross were too strong to be erased i kept them in the composition as bramble stems.overall i think it has worked and i now prefer the more natural feel.i now find myself looking at other pieces that ive kept hold of in the studio that are already framed and therefore 'owe' me money that ive never been 100% happy about with the idea of possible further re-hashing of the images that obviously at some point i found interesting enough a concept to try and draw.

start of a new painting 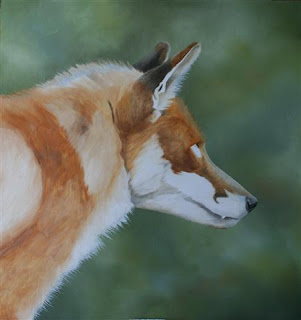 One of my favourite animals is the red fox,a much maligned animal in my view that like its cousin the wolf faces a great deal of hostility in certain circles.i am not a great one for lengthy debates on the rights and wrongs of fox 'control' or the ridiculous excuses some folk hide behind to cover up there simple blood lust or field 'sport' as they would have it known.personally i think the 'sport' is rather one sided.The fox is a magnificent animal with ,granted, guile and cunning aplenty and certainly not adverse to misdmeanors but its a wild animal that despite the persecution piled upon it by us humans continues to thrive by being so very versatile.in this painting,which is quite large for me at 20" x 19" i wanted to show all the fur details and the glint in the eye of an alert fox.ive had the drawing roughed out on a gessoed mdf board for some time and struggled with several attempts at a simple greenish background that would complement the reds in the foxes coat.green really is my nemesis with colour work and invariably my frst attempts end up way too garish and vivid or too muddy from prolonged attempts at colour mixing.eventually,usually more by luck than judgement,i settle upon a colour that works for me and this is where i'm at with the background colour of this painting.having finally sorted out the background ive now blocked in the main shapes and colours of the animal with thinly applied paint.this i'll set aside now to dry for a few days and then i'll start to build the oil layers and details on the fur.
Posted by Unknown at 12:49 5 comments: 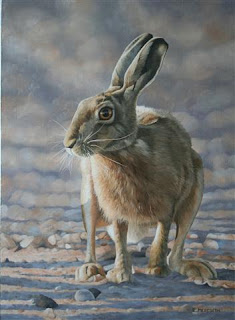 As yet untitled Hare painting is now complete except for a few little fur highlights here and there.In this painting i was attempting to portray a Hare in evening light with long shadows cast by nearby crops and concentrated more on the lighting and the colours,rather than getting carried away with the detail.I think i'm pleased with the outcome,though,as usual,ive been looking at this painting for far too long to be entirely objective about it.i need to leave it alone for a couple of days now and look at it with 'fresh eyes'.The overall size of this oil painting is 17" x 12.5" and once framed and scanned it'll be ready for showing.
Posted by Unknown at 18:55 6 comments: 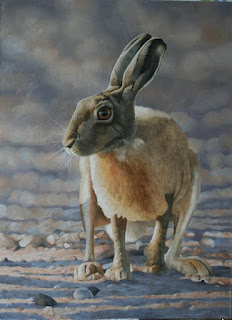 bit more progress to report on my hare painting.ive worked up the detail coats on the head and three of the legs.hope to finish this piece next week if i can master the shadow colouration satisfactorily.
Posted by Unknown at 14:57 No comments: 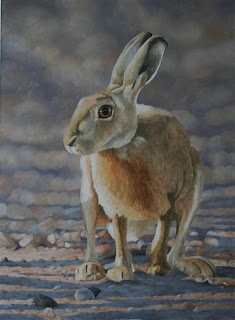 by way of a quick update on this painting,i finished up the underpainting last night and have now set it aside to dry.whilst the colours and level of contrast are by no means strong enough yet i hope you can now begin to get an idea of where i want to go with the painting.
Posted by Unknown at 10:11 No comments: 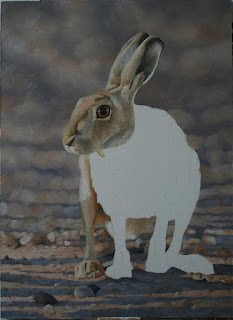 Work has now resumed on the second of my Hare paintings after completion of the little study.My aim with this painting has been to concentrate on the lighting and colours as much as on the details and my hope is i will produce a more 'painterly' image as a result.I have finished working on the background colours and shadows and now i'm working on the first layer of oil on the Hare itself and starting to block in areas of colour and indeed messing around with those colours to try and work out my mixes for the more accurate top coat.so far there are only minor hints to the level of contrast that i eventually hope to show here with some strongly lit areas as well as shadows on the animal.
Posted by Unknown at 12:07 No comments: 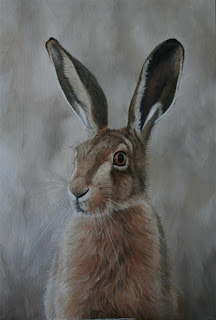 Completed this little oil study of a Brown Hare this morning.
Posted by Unknown at 14:43 4 comments: