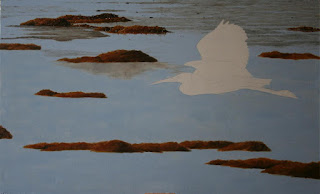 Whilst waiting for my Barn Owl painting to dry sufficiently for me to complete the tree stumps details and thus the whole painting ive picked up on an oil painting that i laid out the design for about a month ago and never really got any further than adding a bit of underpainting.Last autumn on one of my many reference gathering trips i visited one of my favourite birding spots on the south coast Farlington Marshes situated in the northern part of Langstone Harbour.It was a lovely still,bright and crisp autumn's day and the tide had receded leaving the mudflats and lovely brightly coloured clumps of seaweed exposed with channels of standing sea water acting like lovely blue mirrors reflecting the lovely golden browns of the seaweed.Gathered on the mudflats feeding in the shallow water's were a group of about a dozen egrets,members of  whom would periodically take flight,sometimes to feed in a different pool and othertimes to engage in short but very graceful spats with neighbouring egrets.I took lots of shots that day as i invariably do everytime i'm confronted by egrets,just cant help it,they're such elegant,graceful birds and the pure white feathers inevitably reflect all the colours around them.despite the plethora of shots i knew what i wanted in the way of capturing both the brightness of the day and the lovely colours of the weed for a background to an egret painting but i couldn't quite get a good flight capture that would work the way i wanted the image to pan out.As luck would have it a photographer friend of mine had captured some lovely shots of flying egrets in very similar lighting and at the same time of year and graciusly allowed me to base my egret in flight on one of his images,for which i'm very grateful.Having completed the background underpainting i'm now working from the top of the image down adding a detailed top coat of oils,before i make a start on the egret.The egret itself will have to wait to be completed untill ive completed the barn owl painting but either way i hope to have both paintings completed in time to display at Nature in Art during my residency there from 13th march for 1 week.
Posted by Unknown at 22:57 No comments: 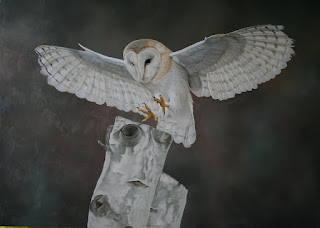 Blocked in the tree stumps now with an indication of the lighter colours that will prevail when the more detailed top coat of oil is added.The painting has been put aside now for a couple of days to dry.
Posted by Unknown at 18:05 2 comments: 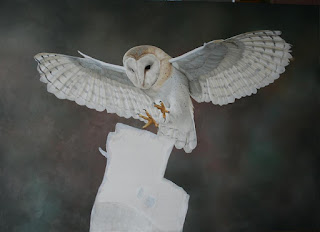 A quick photo of the painting on the board as it stands now.The bird is now complete all bar a bit of tweaking here and there.Ive deliberately attempted to keep this one a little looser than my norm,i didn't want the detail too tight as i'm always a little wary of a tightly detailed bird in flight looking more like a barn owl shaped kite than a realistic flying pose.Next step is to move onto the tree stump and not a moment too soon as my concentration was starting to wane after studying those feathers for so long.
Posted by Unknown at 20:50 2 comments: 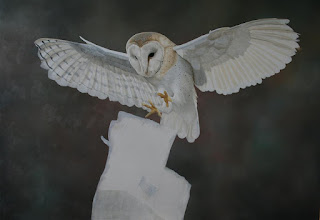 Having completed the underpainting stages on the owl ive now started on the second coat of detailed oil.I'm working from left to right across the board and as you can see ive completed one wing and most of the body of the owl.I shall complete the bird before moving onto the tree stump.I'm hoping to have the painting completed in time to show at Nature in Art,the national museum dedicated to art and nature where i will be artist in residence from 13th-18th March.Ive completed three previous residencies there but after a gap of two years i'm returning to show my transition from graphite artist to oil painter and on show will be a selection of my new paintings and some of my graphite art as well as a range of prints from both oils and pencils and my fine art greeting cards.The museum is located in a fine mansion house Wallsworth Hall situated in Twigworth,gloucestershire and i will be working on a painting in the art studio which is set in the grounds of the hall surrounded by a marvellous sculpture garden.For details of the museum and artists residency program visit there website http://www.nature-in-art.org.uk/ 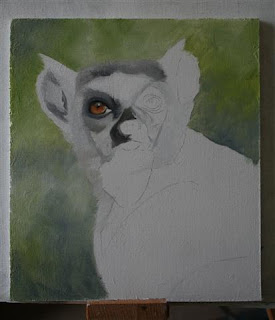 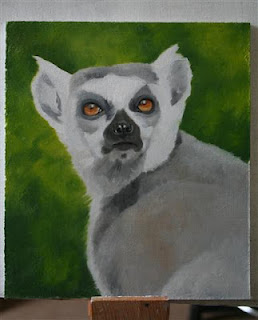 A couple of weeks ago i conducted my first oil painting workshop.it was designed for absolute beginners in oils and was an attempt to de-mystify the medium for the starter painter and by the end of the day hopefully have a good grasp of the basics and maybe even splodge a little paint about.During the day i used this little off-cut of mdf lying around in the studio to demonstrate some of the techniques.The uppermost photo here shows the painting of a lemur as it stood at the end of the workshop and today whilst other larger pieces are drying i thought i'd finish off the underpainting.The image measures only 8" x 7" and it is quite a treat to work on something swiftly with loose brushes,something i may continue to do between larger works.
Posted by Unknown at 14:55 No comments: 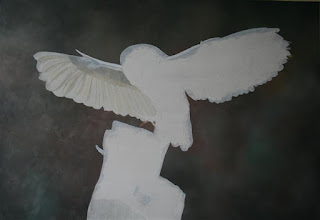 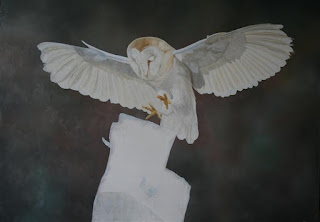 At the moment i have 4 new oil paintings at various stages of which this new barn owl piece is the most advanced.The posted photo's show progress of the underpainting from the start of the day until now,when i'm about to call it a day for today.The loose background colouration is the combination of 3 separate attempts to come up with a convincing colour scheme that i liked.This was allowed several days to dry and then the outline of the owl was reinstated with thinned down white paint.After another couple of days to dry today ive been doing the underpainting using thinned down oils and blocking in loosely the colours and shapes on top of which i shall paint the detail coat of oils once this has dried.This is the largest oil painting that ive tackled thus far and by way of light relief i have a very small portrait of a ring tailed lemur to work on whilst this ones drying.The Lemur painting is the same painting that i demonstrated the art of underpainting on a couple of weekends ago at my 'oil painting for beginners' workshop.
Posted by Unknown at 15:51 No comments:

Ive been made aware that many of my readers are having difficulty posting comments to the blog.As a completely hopeless case in terms of computers and computer speak i havn't a clue what the problem is,suffice to say that ive gone through the settings menu and everything appears in order and so i intend to try and get to the bottom of this with blogger.My apologies if youv'e tried to post comments only for them to disapear into a black hole somewhere,they're not in my spam folder but seem to have disapeared completely.i really do love to hear back from you so please persevere whilst i try and find out what the problem is as many of the comments do still get to me.
Posted by Unknown at 10:23 4 comments: