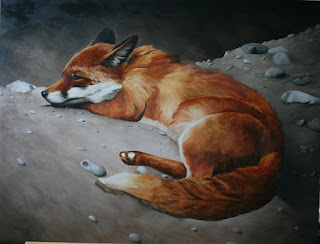 Well its been a while since i last posted a wip and i am extremely happy that ive finally shaken off whatever it was that disabled my ability to paint over the last couple of months.At last i'm able to bring some concentration to bear and for the first time in a while felt that things were going my way with a painting.So here's where i am with this fox painting.I had to completely re-think the initial background ideas and simplify matters in order to make sense of it and i'm still working on elements of the foxes surroundings.Meanwhile the fox itself has been underpainted and a little more work completed on the head,there's still much to do but at least i am progressing.i hope that this will now proceed swimmingly,i guess it was probably a little too much to expect that the transition from graphite artist to oil painter would go altogether smoothly without hitch's.i have a further 3 paintings underway including my large leopard painting which has well and truly ground to a halt as i try and work out how to effectively portray the tree its perched in to my satisfaction,it has been re-worked many,many times now and only my stubborn nature has prevented me from binning it and starting on something more in my 'comfort zone',only time will tell if that proves a wise decision.

Congratulations on breaking through the barrier .... beautiful fox and I look forward to seeing next stages

thankyou sue,been a challenging time but hope things are on the up now:-)