Start of a new oil 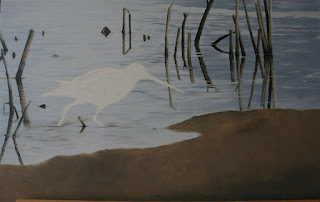 Ive wanted to paint this scene ever since i managed to very luckily get a couple of decent shots of a snipe scurrying from one patch of cover to another.I was visiting Oare marshes in Kent on a bit of a patchy day as winter was just beginning to give way to spring.As i looked through the viewfinder on my camera i caught a bit of movement at the waters edge and decided to follow what i had recognised as the cryptic plumage of a snipe working its way through vegetation in the hope that i may get a decent shot if it emerged at some point.after a few moments the bird reached the edge of one patch of vegetation and made a dash for a further clump of dead and dry vegetation a few yards away and was in the open just long enough for me to fire off a couple of shots.when i got home i checked my camera and was delighted to find a lovely shot of the bird moving quickly and decided one day i would attempt to paint this.And so the day has come to try and do this scene justice in oils.ive decided to work from back to front with this painting as the layers of vegetation will be overlapping each other the further forward the image progresses.i started by laying in the basic background tones for water and mud ,preserving my drawn out snipe as best as i could.i then added some more colour and built up,quite thickly and relatively loosely the water.The painting was then put to one side for a month or so as i worked on other pieces and now having returned to this one i'm now adding the background vegetation and its reflections before i tackle the bird itself.i really know no other way to handle my paints other than in a meticulous and detailed fashion and so i foresee this painting taking no less an amount of time than usual to complete.