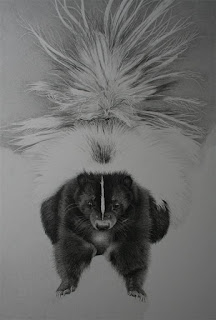 A further layer of graphite(B grade) has been added to the background toning to really lift the skunks tail from the paper and final detailing completed.now i turn my attention to the foreground toning which will take many patient hours to complete and will comprise of at least four layers of graphite t build up the tone and the shadowing under the skunk to anchor the animal.The skunks pose is quite difficult to describe and not readily obvious from looking at the drawing until the shadowing is added then i hope it will make more sense to the viewer unfamiliar with the contortions that the skunk performs whilst offering a warning to 'back off'.the animal stretches out both front and back legs with its front paws off the ground supporting itself instead on its wrists with its belly consequently close to the ground.at this head-on angle its hind legs are pretty much obscurd from view by the front legs and belly fur.the back is arched and that amazing tail is held aloft curled over its back and the fur seemingly seperated into individual filaments.on my drawing you can see on close inspection the first layer of H grade pencil has been applied as far as the front right paw,this will be continued around the animal and then subsequent layers added over the top.