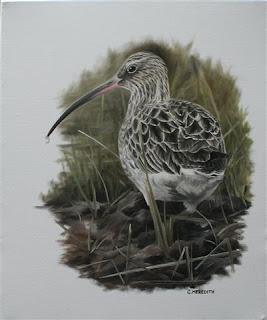 Tinkering with oil paints once more and decided to produce another quick,loose oil sketch based on observations of a curlew at farlington marshes near Portsmouth,UK.
On a cold crisp January day I visited the marshes on the  outskirts of Portsmouth and with camera in hand walked the seawall separating the marshes from Langstone harbour getting views of waders and other seabirds on both the freshwater marsh on one side of the wall and the mudflats of langstone harbour on the other.This curlew was busy feeding amongst the seaweed and seagrass at low tide on the mudflats and was quite close to me affording me unusually great views.After the success of my last avocet oil sketch which was so well received and sold almost immediately I thought I would approach this subject in the same loose manner and just see where it led me.