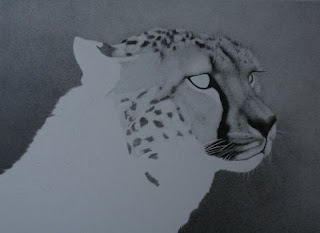 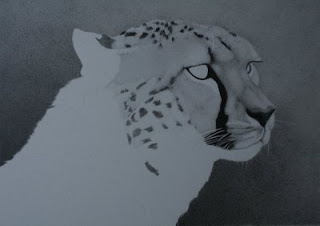 Progress has been slow on my cheetah portrait not for any particular reason other than the sudden appearance of a mystery object over the uk,apparently it's known as the 'sun' .Due to this unexpected but gratefully received phenomena i couldn't resist the temptation to abandon the studio for a few days of 'r n r'.Having gotten back to work today i thought i would post a couple of progress shots,the first showing the progress of the underdrawing and building up of tone and form in layers of H,HB and B grade pencil.The second photo shows the beginnings of rendering the fur texture with a 2B pencil,there is still a long way to go on defining the cheetah's markings but it is beginning to take shape.
Posted by Unknown at 16:11