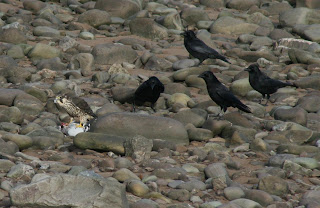 since my last posting ive been rather busy with getting artworks out to various xmas shows and preparing boards for new works.There will be several new limited edition prints added to my portfolio over the next couple of months which has meant a lot of to and fro-ing to publishing house of late.As i write this i have taken off for a few days in Somerset for a short break with my family and friends and am enjoying walking along the local coastline and moors armed as always with my trusty camera.it was while taking a short stroll along the esplanade at Minehead that i came across a young peregrine falcon that had just taken a pigeon and was busy plucking feathers whilst being accosted by a growing band of crows attempting to drive the bird off its kill.luckily i had my camera with me and shot over 100 photo's over a period of 15 minutes or so during which the falcon plucked and fed on the carcass whilst fending off the ever more daring crows.As the band of crows numbers slowly swelled they started to venture very close to the falcon and tugged at its tail and wing feathers much to the birds annoyance in an effort to drive it off but the plucky bird refused to be driven away for some time as it ate its fill before abandoning the pigeon carcass to its tormentors.this was my first morning in Somerset and i thought it was a great omen for the rest of my stay here.looking forward to a long walk on the beautifully desolate Exmoor today and i wonder what i may encounter.

What a wonderful encounter - don't we take so much for granted our meals, which are consumed at leisure without the worry of predators or pilferers!