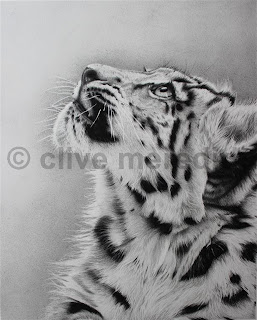 After several days work on the body fur of this young cat i'm calling the drawing complete.the completed image measures 13.75" x 17" and will shortly be winging its way to the publishing house for scanning.This piece has been a little experimental for me as ive been trying out several different types of pencil in combination to see if anything can be 'added' to my imagery by incorporating one or more different pencils.apart from my usual derwent graphic graphite pencils ive also used wolfs carbon pencils and my latest addition the conte pierre noire pencil.both the carbon pencil and pierre noire produce very deep,matt blacks ,and after initial scepticism about the sheer 'blackness' of them compared to graphite ive decided I rather like them when combined with the graphite,i think it adds another dimension to the work.i think I will find more of a use for the conte's than the carbon pencils as they have several advantages over them whilst giving very similar results.The major disadvantage I found with the carbon pencils is that they cannot be used over graphite meaning that they had to be used very precisely to avoid problems,i also didn't particularly like the feel of the pencil when applying to paper whereas the conte's can be used over and combined with graphite very successfully and I found that suited my purposes better.i hope you've enjoyed watching this latest pencil drawing coming together.limited edition prints will be available in due course on my website www.clivemeredithart.weebly.com

thankyou Kathryn,although difficult to go wrong with such a fabulous subject :-)

thankyou marc,the addition of the carbon pencils seems to have brought an extra dimension to the piece